Narcissism vs The Healthy Self 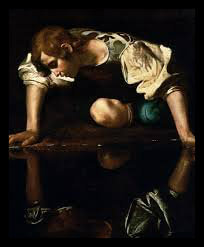 Narcissism vs The Healthy Self

"Vanity and narcissism- the compulsive need to be admired and praised- undermines one's courage, for one then fights on someone else's conviction rather than one's own."- Rollo May

Self-esteem, sense-of-self and ego are all terms used to describe oneself as distinct from the world and others.  It is the opinion a person has about themselves.

Psychological health hinges on a healthy sense of self which is formed in infancy and early childhood.  When all parts of ourselves are accepted during this period of development, not just the ones prized by society or our culture we, in turn, develop the ability to accept all aspects of ourselves and to tolerate our imperfections.

If, as children, we are held to external standards of success and accepted only for such things as intelligence, appearance and status, we experience shame around other aspects of ourselves and will likely develop narcissistic wounding that will not only prevent us self-acceptance, but also prevent us from being fully accepting of others.

Narcissism and narcissistic wounding can manifest in a variety of ways in adulthood.  Narcissism can present itself as extreme confidence; an attempt to hide inner fears and lack of worth.  It can manifest as a stagnant, frustrated existence because the individual is too afraid of failure to take risks or apply themselves even in areas of natural talent.  Sometimes especially in areas of natural talent because the individual may feel held to higher standards in those instances.  Narcissism and narcissistic wounding can result in depression, anxiety, fear of commitment, a history of relationship conflict or isolation, just to name some of the most common manifestations.

Those who have experienced narcissistic wounding at the hands of early caregivers (narcissism often passes from generation to generation) are often very sensitive to criticism and attack even where it doesn't exist.  They are so accustomed to having been criticized for external achievements by narcissistic caregivers that they are constantly on guard, either consciously or subconsciously, against the judgements of others.  They often believe they are responsible for the moods of those around them, a situation that is both exhausting an anxiety inducing.

For some whose sense-of-self has been damaged by narcissism, anxiety is experienced anytime they are not serving others.  Still others experience near constant anxiety because no matter what they do, they fear they should be doing something else, something better, something more important.

Underlying all these behaviors is a fear of abandonment; the implied threat carried from infancy and early childhood.  Small children rely on caregivers for their every need.  A lack of acceptance is often experienced as a real threat of abandonment; a mortal threat.  Even those we think of as strong and overbearing with seemingly little concern for those around them hold this fear at their core.  Their confident exterior is a means of self protection.

Narcissism and narcissistic wounding can be overcome but it is not easy.  Psychotherapy is often necessary to help the individual become aware of aspects of the self that have been damaged.  That being said, there are steps individuals can take on their own to gain insight and effect change.

For those wanting to learn more about this topic, I highly recommend the book "Trapped In the Mirror: Adult Children of Narcissists in Their Struggle for Self" by Elan Golomb, PhD.