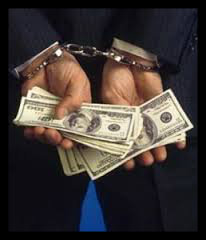 "A man's work is one of the most important parts of his social identity, of his self, indeed of his fate, in the one life he has to live." - Everett C. Hughes, Sociologist

In addition to work being a major source of self-esteem and self-identity, work is also the key to our material and physical safety.  Without work, we could not afford food, housing, or care for our families.  Because we rely on our jobs to fill such important needs, this can often make us vulnerable to what is increasingly being recognized as "Corporate Stockholm Syndrome."

"Stockholm syndrome" itself is a term originally coined in the 1970's after a group of hostages in Stockholm, Sweden, defended their captors against police. They had been held 6 days against their will at gunpoint. The incident became the catalyst for many subsequent studies.  Stockholm Syndrome is defined as a situation in which mistreated hostages begin to identify and sympathize with their captors.  Researchers believe this to be a common human defense mechanism that lessens the psychological threat of the aggressor when his/her value system is internalized by the captive.  Physical and emotional abuse, not just captivity, can also trigger Stockholm Syndrome.

"Corporate Stockholm Syndrome" is a term increasingly used to define a situation in which employees are loyal to, or heavily identify with, an employer who is clearly hostile to their self interest.

1.  SS: Perceived threat to survival and belief that the captor is willing to act on that threat.

CSS: Company termination quotas in which ranked employees at the bottom levels are let go, and other threats to the loss of one's job, fear of being demoted or losing a promotion, all represent real threats to an employee's sense of safety and material well-being.

2.  SS: The captive's perception of small kindnesses from the captor within a context of terror.

CSS: Company perks, promises of advancement, positive reviews, and bonuses all represent "small kindnesses" within what may be an otherwise hostile environment.  (Hostile work environments can include verbal abuse, bullying, and unreasonable work hours.)

3.  SS: Isolation from perspectives other than those of the captor.

CSS:  Heavily reinforced company culture and values, overly prescriptive policies and procedures and reinforced, unfavorable viewpoints pertaining to the competition can all result in isolation from other perspectives. Questioning of authority in these situations is looked upon as not being a team player and therefore is considered self-interested, selfish and bad. Unreasonably long work hours can also lead to a situation in which employees are too stressed or too busy to consider alternative perspectives.

CSS: A poor economy making job change difficult, expenses such as mortgage, college or childcare can all lead to the perception that one cannot escape one's current situation.

The effects of Corporate Stockholm Syndrome can be devastating.  Family systems shatter. Self esteem, one of the main rewards of work and career, plummets and one succumbs to anxiety, depression and lack of sleep trying to work hard enough to gain it back.

Understanding the dynamics of Corporate Stockholm Syndrome is the first step toward gaining enough objective distance to see the situation for what it is.  Once that is possible, it becomes easier to honestly assess one's authentic priorities against one's current quality of life and start judging the real worth of one's work.